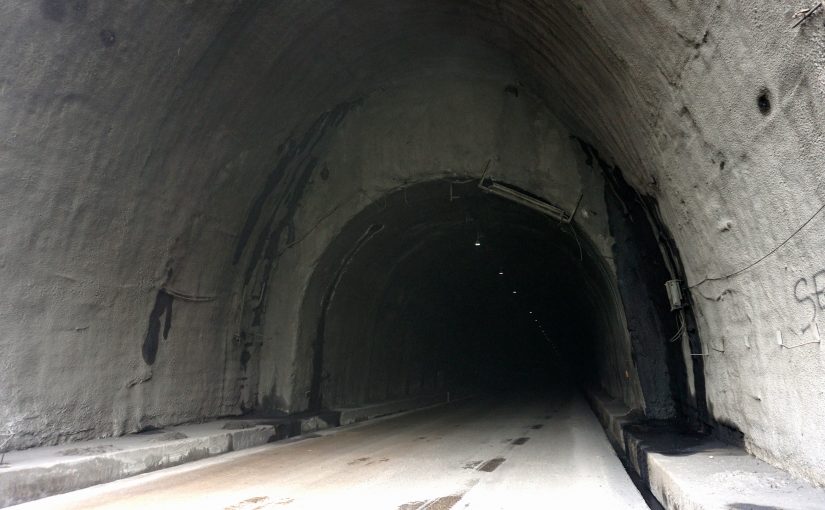 That’s at least how the Daily Mail called the five kilometres long, barely lit, unventilated Anzob Tunnel, which connects the two largest Tajik cities Dushanbe and Khujand at an altitude of 2,700m. We cycled through it.

Obviously, being the Mail, that title is based on little to no evidence that anyone has ever actually died in the tunnel. But it sounds cool. In order to get to Anzob, we followed the Zeravshan river across the border from Uzbekistan and slowly climbed up the wide green valley until the small town of Ayny, where we were able to stock up on food and water.

After Ayny, the road turns south, following a smaller and wilder river upstream into an ever narrower gorge of stunning beauty. It’s the moment where I was scared for the first time on this trip. It was late afternoon and the temperature slowly decreased as we climbed higher. While the gorge closed in on us with walls a hundred metres high, it had begun to rain and the wind had picked up. We heard the grumbling sound of falling stones all around us and saw cars stopping on bits of the road where stones had come down the mountain.

I really felt we should not had come here at this late time of the day. The gorge offered no escape for us, just the walls above, the winding road ahead, and the wild river below us. We had heard stories of people camping on the hard shoulder of one of the steep curves — not exactly ideal given that those are also used by trucks passing each other.

Frances reassured me. Being more experienced in the mountains than myself and carried by tons of positive excitement about having left the desert, she was convinced the valley would widen up and give way to settlements. And it did! After about an hour and a half (and some more discussions about whether and how to continue, which Frances patiently endured) we reached the village of Iskander, where we set camp in the garden of an abandoned house a little way off the main road. I was happy again.

Iskander sits at around 1,600m. The next day the real climb started. We slowly made our way up the perfectly tarmaced road to Anzob, battling against the wind which had decided to blow down the valley that day, but passing beautiful mountain scenery all along the way.

A bit after midday we reached…

The Anzob Tunnel is actually quite new. Construction started in the early 2000s with the help (and I guess financial support) of Iran. Before its official opening in 2006, there was only a steep dirt track crossing the nearby Anzob pass, which is over 400m higher and accessible only to strong 4×4 vehicles. The tunnel project aimed, for the first time in Tajik history, at allowing direct truck traffic between the country’s two major cities Dushanbe and Khujand, which – until then – had to detour several days via Uzbekistan. The two countries not always having been the friendliest of neighbours, Uzbekistan used this power from time to time to block access to Tajik traffic, practically bringing Tajikistan to a standstill.

In fact, the tunnel project was so crucial to Tajikistan that they decided to open it to the public long before construction was finished. For years trucks, cars, and the occasional cyclist drove through the five kilometre long tube without pavement, ventilation or even light. It must have been sheer horror, which is why in 2015 the tunnel was closed again for “maintenance”. Today, the pavement is reasonable, there is some (way too) dim light inside but still no ventilation.

For cyclists it is a daunting ride. In addition to our bicycles’ head and tail lights, we attached head torches to the backs our helmets and dressed up in our most flashy clothes in order to maximise the likelihood to be seen. Breathing heavily, we cycled through the thick black fumes inside, waving hands each time a car or truck would thunder past us from behind.

After 15 minutes of stress, the tunnel spit us out on the other side into a gorgeous green valley flanked by snowcapped mountain tops. With almost 2,000m of descent to Dushanbe ahead of us, we thought we were in cyclist heaven — until a Russian truck driver handed us a small mirror. The heavily polluted air inside the tunnel had blackened our faces to a degree that made us look like chimney sweeps coming from work. In fact, after three showers there would still be black colour coming out of our hair. A pity we cannot shower the inside of our lungs.

The descent was still wonderful. We happily rolled down the 70km into Dushanbe, first through a steep, narrow gorge with spectacular views, later along an increasingly calm river hosting luxury hotel resorts for Dushanbe’s upper class.

Although we spent a good amount of our two full rest days in Dushanbe with organising our GBAO permits (which went smoothly), writing blog posts and chatting with fellow travellers, the parts of town we did visit struck me as very livable, relaxed and friendly. Our hostel was located in the east of the city in a quarter featuring mainly small one to two storey houses and shops along quite, partly broken one lane streets. Our longing for good food did, however, also lead us into the more fancy parts of town, where we sat at a long, tree-lined shopping avenue, sipping at fresh (and highly deserved!) milkshakes.

Besides the relative small crowd of overland travellers (4×4 drivers, motorcyclists, hitchhikers and cyclists) there seemed to be few tourists around. Which is probably due to the lack of “sights”, with the notable exception of the world’s largest flagpole.

On days 3 we had planned an early departure. Temperatures in Dushanbe are almost comparable to Bukhara and we wanted to use the cooler morning hours (i.e. before 9 a.m.) to make some distance towards our next goal: the Pamir Highway. We failed.

While packing up, I noticed that a key part of my rack, carrying most of my luggage, had broken off. I have no idea, why my bike maker Kona had decided to put an aluminium rack on a travel bike. Aluminium is not only less strong than steel, when it breaks, it is also much harder to repair due to its higher melting point.

I spent half the day trying to find a mechanic in Dushanbe able to weld aluminium. Eventually, a guy in a run-down garage on the other side of town fixed it for me and we were able to head south towards the Afghan border and into the Pamir mountains.

5 thoughts on “The Tunnel of Death… wait what?”