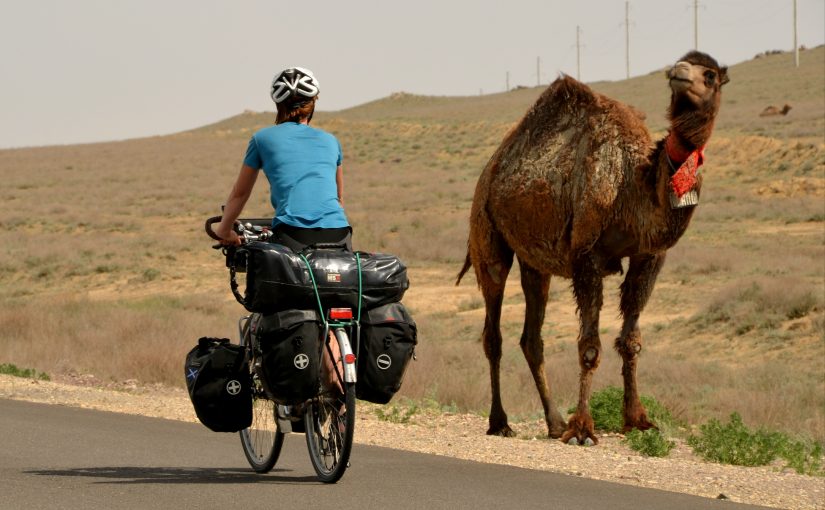 On 8 May, almost one week after our arrival at the ferry port of Alat in Azerbaijan, we have finally succeeded to cross the Caspian Sea and arrive in Kazakhstan. We had a good time on the boat, setting up an open air camp on the upper deck with the other English speaking travellers and I was even allowed to give a spontaneous PrivacyCafé!

It was the fourth night of camping in the port, when around two o’clock in the morning port officials came to our tents and camper vans to wake us up. Our ferry, the Mercury 1, had finally arrived and we were allowed to board. Before that we all had to go through border control though and that took a while. Sleepy but in good mood, the small crowd of foreigners was the first to get to the checkpoint. The border guard was grumpy, maybe tired himself, maybe annoyed about so many Westerners.

Although I wasn’t the only German citizen in our little group, it took me almost 15 minutes to convince him that I didn’t need a visa for Kazakhstan since I would get one on arrival. He made four phone calls (presumably with colleagues or superiors) to inquire about this or me before he stamped me out of the country and waved me through.

It was a good reminder for just how much power border guards have and how vulnerable one is when crossing borders. This one grumpy guy held the future of our whole trip in his hands. Had he decided that I wasn’t allowed to go to Kazakhstan, there would have been no recourse for us, nowhere to complain. After four days of waiting in the port, he could have easily denied me boarding the ferry. We probably wouldn’t even have gotten the 140 US dollars back that we had paid for the ferry ticket.

Although the ports of Alat in Azerbaijan and Aktau in Kazakhstan are a mere 450 kilometres apart, the crossing itself took three additional full days. The crew kept on talking about some storm out on the sea because of which we had to anchor off the coast of Baku for a day and wait for better weather. At first we found the storm story hard to believe as we had sun and blue sky all over and the weather forecast for the Kazakh side had been equally good.

But as it turned out, the ships they use here aren’t originally made for crossing the Caspian. Like the other ferries on this line, the Mercury 1 is a rusty Soviet era vessel with an apparently very low draught, allowing it to more easily navigate in shallow coastal waters. On the open sea, however, relatively light winds seem to be enough to bring those ships in trouble. A few years ago, a ferry similar to ours capsized during stronger winds on the Caspian which cost most of the passengers’ and crew members’ lives. Since then, they are hyper cautious, probably rightly so.

As we had lots of time to kill on the boat, we met in small groups on the upper deck to play card games or chess, hang out in the sun and continue to discuss the economics of waiting in this part of the world. Our German camper van friends Susi and Thomas set up a cozy camp by installing sun and wind protections and I had the opportunity to hold a spontaneous PrivacyCafé for some 13 people. We had a great discussion about the need for privacy, how modern consumer electronics is built on the business model of surveillance and advertisement and what normal users can do about it.

As fun as it was to spend time together on that boat, we were all relieved when finally on 8 May the Kazakh coast was in sight. After some lengthy and entirely inefficient passport and customs control procedures (and although it took us almost 15 minutes to convince the customs officer on duty that our bicycles had no engines and this did not need customs clearance) Frances and I were among the first to be allowed to leave the Aktau port.

We quickly cycled the ten kilometres into the centre of Aktau to get local currency, a Kazakh SIM card and to stock up on food and water before heading into the desert. Neither Frances nor I have any noteworthy travel experience in deserts so it was kind of an experiment for us trying to figure out how much water and food we would need. Luckily, the first 100km out of Aktau are quite busy with regular shopping opportunities.

We made good progress that afternoon thanks to a heavy tailwind and found a decent camp spot behind an abandoned oil refinery. (We literally slept next to a puddle of finest Kazakh crude oil.) The next day, however, the wind decided to blow in the others direction, right into our faces. Living in the UK and Belgium, we are both used to cycling against the wind, but this was different. It felt as if the desert tried to stop us from cycling at all. We battled on against winds of over 40 km/h when the most surprising thing happened: it started to rain. Because of the wind, the rain drops hitting our skin were almost painful.

We carried on, uncertain if we were prepared for all this, but encouraged by the fact that at least we were good on food and water. Around noon we found one of the few truck stops out here, sitting at one of the (even fewer) roads crossings. The waitress was so excited about our visit that we had to take a dozen photos with her using all kinds of different Instagram filters.

While we were having some surprisingly good Mante for lunch (tortellini-like pasta with meat filling), it had stopped raining and the sun came out. “Great!” we thought, naïvely ignoring the fact that we were in the desert. Within two hours or so the temperatures had risen by 10°C and the steppe was boiling.

We cycled on at 38°C, wind still in our faces, and tried to cover as many kilometres as possible. At around 4 p.m. we folded. Exhausted, dehydrated and discouraged, we held our thumbs out and hitchhiked 40km to Shetpe, the next town. By the time we reached Shetpe, it had cooled down and the wind changed direction again (or was it the road which had changed direction?). We bought water and food for the next day and cycled another 20km before we set camp at a wonderful quite spot by a water well.

The further we went into the desert, the emptier it became. Settlements gave way to houses, houses gave way to camels, camels to sand and dust. The only signs of human intervention were the road itself and an electricity line running along it. We felt both humbled and somewhat intimidated by the vastness of this empty land. Few people live out here. Those who do gather in dusty villages by the road, feeding their cattle, goats and camels from whatever the barren soil provides.

It is hard for someone who has grown up in Europe, where most land is fertile and farmable, to understand how live works out here and why people settle(d) in such places at all. Why don’t they move to cities such as Almaty or Astana or at least closer by in order to improve the availability of goods? Is there something else to this hostile land that the traveller’s eye cannot see?

With those thoughts, we rolled up our tents and packed our stuff to ride day 4 in the desert. We were excited because Beyneu, the next noticeable town, was only two days away and because the wind seemed to have turned in our favour. Only when we had both feet on our pedals did we notice just how much so. The same unforgiving wind that had slowed us down to 7 km/h two days earlier was now pushing us to over 30 km/h without much effort from our legs. We were electrified!
Happily chatting about all the world and her husband we enjoyed watching the camels crossing the road, saved another turtle from certain death on the road (did that in Azerbaijan already) and counted the endless number of dead hedgehogs who had been less lucky. All the while cycling an average speed of 35 km/h on our fully packed bicycles.

By midday we had pedalled 100 kilometres, more than we would often do in a whole day. Trying not to be carried away we started dreaming of reaching Beyneu and its promise of a hotel with shower and clean sheets. For our second lunch we had done 140 kilometres, so we did get carried away and started pedalling harder. By 4 p.m. we were only 20 kilometres away from Beyneu and just hadn’t noticed that that’s where the road turns north — against the wind.

Needless to say that the last stretch was very painful. With this long distance behind us and the goal so near, however, even the sudden appearance of regular passing trucks carrying sand and little stones which the strong wind threw in our faces as they passed couldn’t stop us anymore. After 182 kilometres in one day we reached the town of Beyneu, a hotel with clean sheets (also hosting a French cyclist couple with their dog as well as a Swiss solo cyclist heading west) and a good diner.

The wind determines our lives out here. And sometimes, it is our friend. 🚴💨

5 thoughts on “The ferry, the wind and a baking desert”