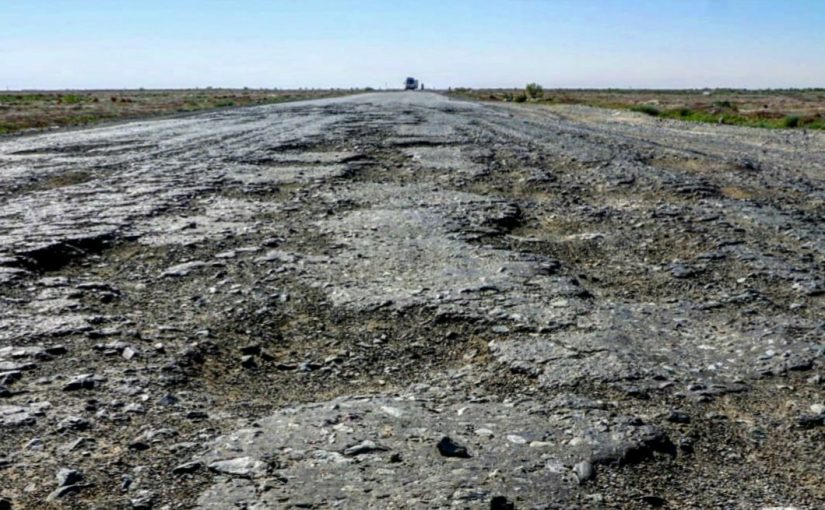 Cycling through the Kazakh desert was a challenge. It was hotter than expected, windier than we thought, and scarclier populated. Yet, we had no idea how hard the road ahead to Uzbekistan would be.

In short: Cycling through the desert in Uzbekistan is like Kasakhstan but on infintely worse roads. A Swiss cyclist, whom we had met in our hostel in Beyneu, had warned us especially about the first 85km of the road leaving Beyneu, but the reality was even grimmer: For 150km we cycled on an unholy mélange of gravel, sand, and broken pieces of old Soviet tarmac.

After that, the road consisted of mostly potholed tarmac with the occasional kilometre of sand and gravel. Our average speed dropped below 10 km/h while the sun continued to grill us with over 35°C. For several days we cycled on the left side of the road in order to escape the huge clouds of dust that (equally slow) passing trucks whirled up behind them.

This part of Uzbekistan is easily the hardest road I have ridden so far, both physically and mentally. Not surprising that we met no other cyclists out here. We believe that most take the slow overnight train from Beyneu to Nukus, the first Uzbek oasis town by the river Amu Darya, around 600km east from Beyneu.

Arriving in Nukus after 6 days of broken road through empty lands felt like an epiphany to us. The road winds around a few higher sand dunes, blocking the view, until it suddenly drops 100m into a totally unexpectedly green valley. Water! Trees! Even flowers! We were mesmerised by the abrupt change in landscape and the sudden availability of all kinds of “pleasures”, including shade and Pepsi.

Despite being described by Lonely Planet, the almighty judge of travel, as “one of Uzbekistan’s least appealing cities” with a “general sense of hopelessness and desolation”, we found it to be a wonderfully relaxed place with lots of curious young people, good food and a welcoming atmosphere.

After our arrival we had just sat down in the hotel lobby, tired and in dire need of a shower, when three young women approached us and asked if we would give them an interview. They were junior students of English at Nukus University and this week’s coursework consisted of interviewing English native speakers about their travels and their time in town.

We curiously agreed to meet the next day in front of the city’s Savitsky Museum (according to Lonely Planet the only “sight” worth seeing), which houses one of the largest collection of Russian avantgarde art. They joined us for a visit of the collection and invited us for lunch despite our repeated attempts to settle the bill. While eating, and afterwards continuing in the bookshop next door, Frances patiently answered the students’ questions all the while being filmed and recorded for their coursework.

Of course we used the opportunity to ask questions back and they talked surprisingly openly about politics and society in Uzbekistan, a country that isn’t exactly known for its top-notch human rights record. We learned that the appointment of Shavkat Mirziyoyev as new President of Uzbekistan in 2016 has apparently led to a couple of positive developments in the country.

For example, for many years the Uzbek government has forced its citizens to work on the country’s cotton fields for free, effecively making Uzbekistan the world’s second largest modern slaves market, according to Wikipedia. Every year up to 4% of the population or 1.2 million people were forced to pick cotton for the government. It seems that this year, however, the forced labour scheme has been “cancelled” for th first time, making our student friends very happy as they could use their precious time to advance their studies (and/or just enjoy a normal life).

The girls also took us to the Nukus bazaar, made us taste camel milk, fresh mulberries and Uzbek honey before wishing us a warm goodbye with some last rounds of selfies. Frances and I are very grateful for their hospitality and the wonderful and insightful day spent together.

Note to myself: cycle touring is as much about people and culture as it is about mental and physical challenges.

We spent our second rest day in Nukus to clean our beloved bicycles. During the days in the desert, our cassettes, chains and chainrings had been covered in ridiculous amounts of sand and dust which become a real pain when mixed with chain oil.

From Nukus we headed southeast towards the ancient town of Khiva, enjoying the 2-day ride on small roads along the lush-green Amu Darya valley. Contrary to the desert, villagers of this valley often use bicycles themselves and we had more than one wave, smile and chat with a friendly farmer on his old rusty roadster bicycle.

The friendlier environment even encouraged us to cycle the extra mile of sand track to visit Chil’pk (or Chalpyk) Kala, one of the ancient Silk Road fortresses. The once mighty clay walls, which are believed to have been built in the first century BC, still overlook both the desert and the Amu Darya river valley – although today they are almost washed away by wind and weather. Only the castle’s distinct features set it apart from the surrounding sand and render it visible from over 10 kilometres away.

7 thoughts on “The longest road”