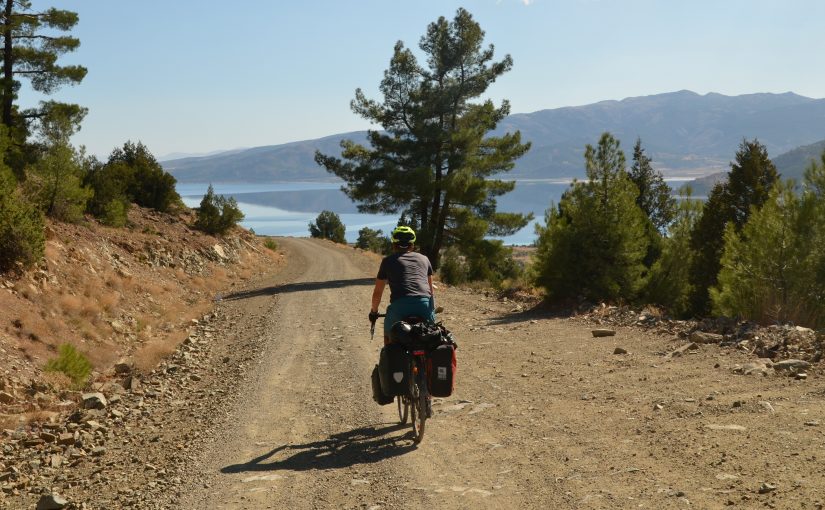 Western Turkey is a cyclist’s paradise. There are wonderful roads through beautiful landscape full of friendly people waving to say hello. And yet, you will only like it under the following conditions.

1. You need to love cycling uphill. Wherever you leave the Turkish coast (and that is also true for the northern city of Bursa, where I started), you have to cycle up 1,000m altitude before getting anywhere. After that it continues to be a constant up and down, which is admittedly also the reason why the landscape is so beautiful. 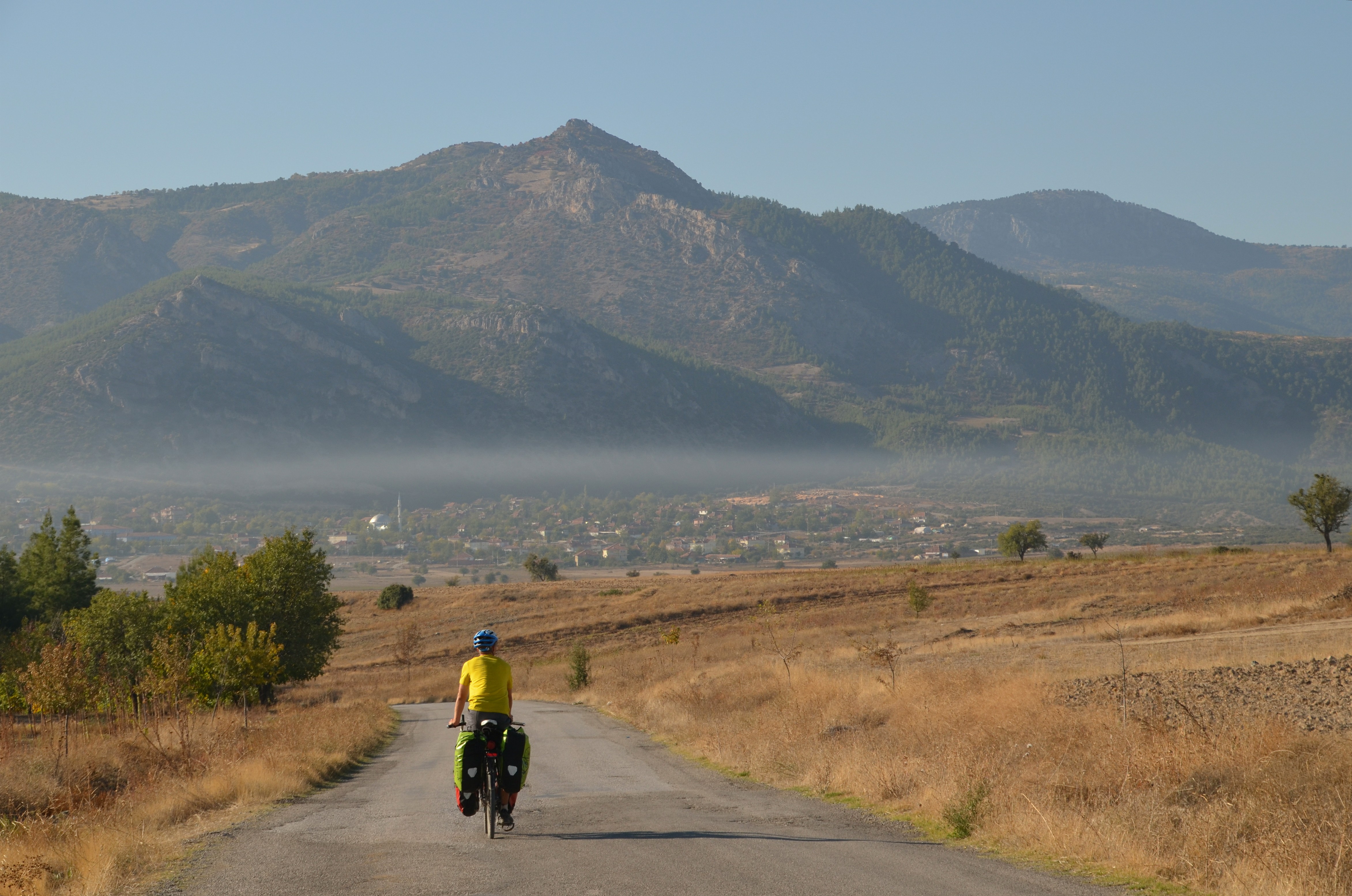 2. You need to be willing to accept extreme drought. Right now, in autumn, all water seems to have left the soil. Riverbeds were dry, the harvest is done and farmland is no more than spiky stubble fields.

3. You need to like tea. Because as a cycle tourist it is almost impossible to go through a Turkish village without being stopped by some friendly old man offering you a glas of çay. 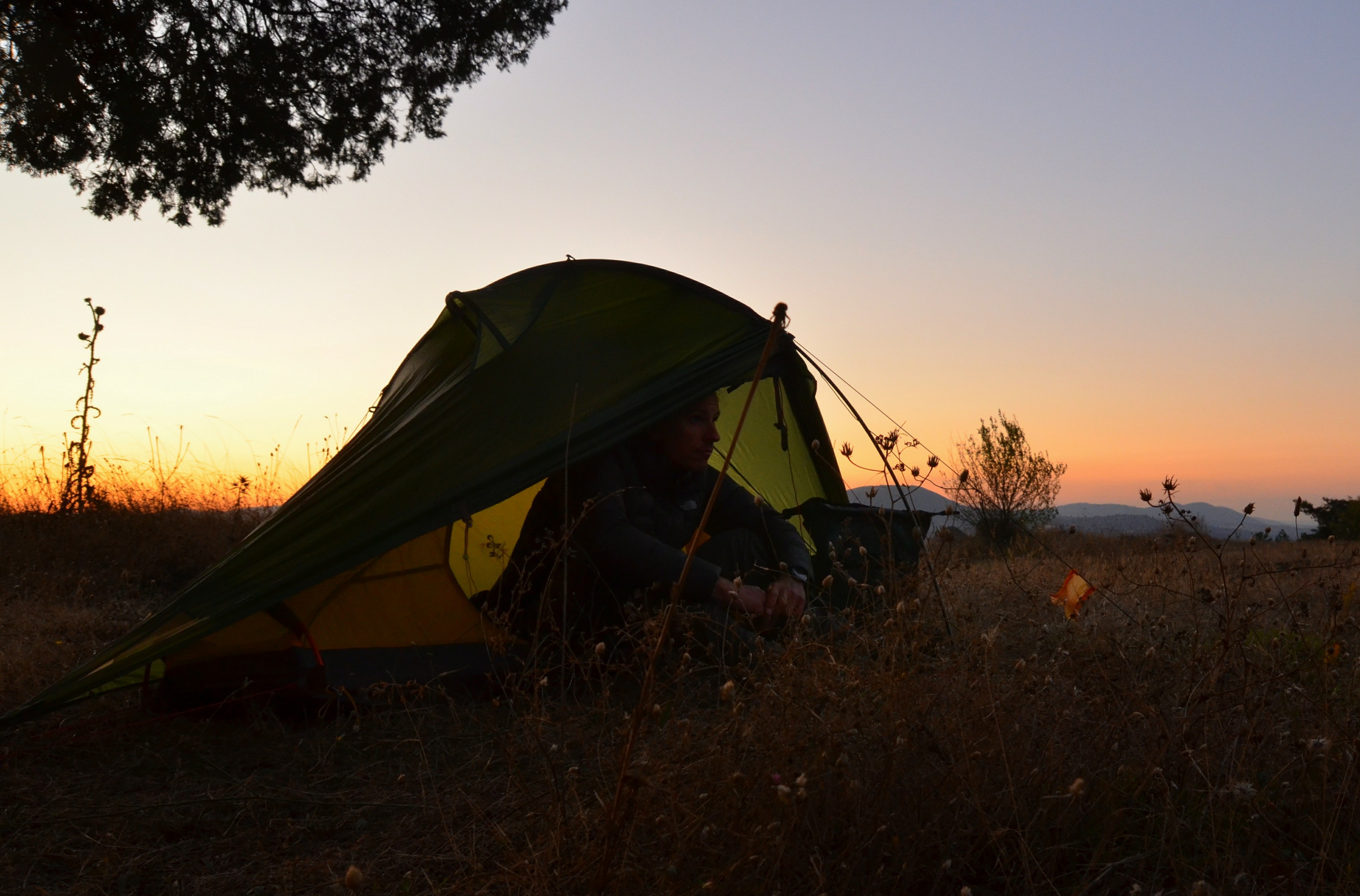 4. You need to enjoy hot days and cold nights. We’re in the last days of October now but the Turkish sun is still capable of grilling a cyclist’s unprotected skin and brain. When Jona and I pitch our tents around 6pm, we often enjoy the sunset sitting outside in shorts and T-shirt. But as soon as the sun is gone, it’s time for more layers and at 7pm we sit wrapped in our down jackets and hoodies. From summer to winter within one hour.

A lot has happened since I said goodbye to my friends in Istanbul and took the ferry to Bursa. Bursa is the fourth most populous city in Turkey and yet it’s as big as Berlin. I knew that south of the city, some 300m altitude uphill, I would find a large public forest and park where I hoped for a nice spot to spend the night. 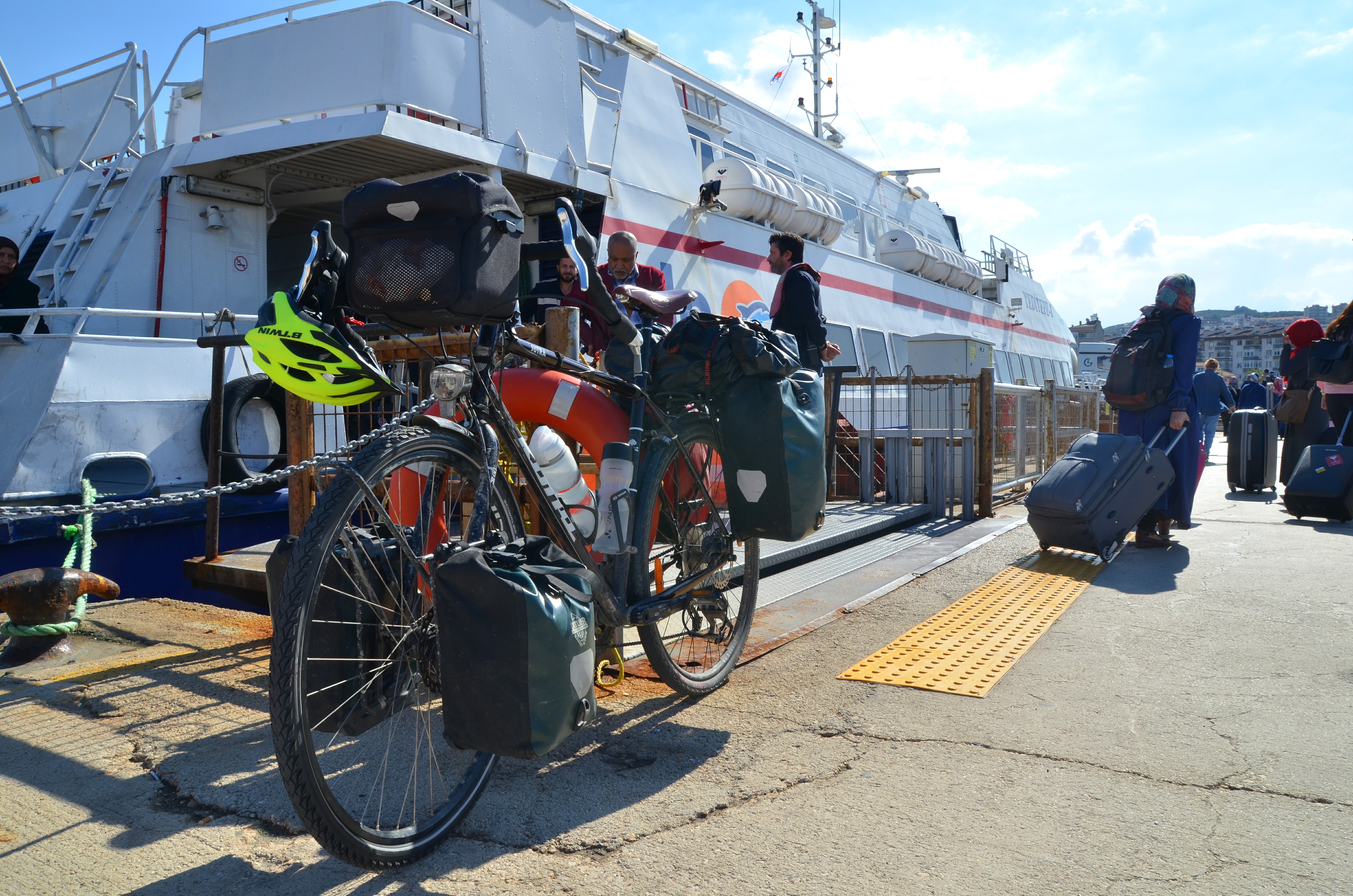 That didn’t happen of course. When I arrived there around 5pm, tired and sweaty, a mid-aged man was sitting in the park picnicking with three friends. They waved and invited me to their wooden table. None of them spoke much English but thanks to Google Translate we got a small conversation going.

For one hour I tried to politely decline Rafet’s invitations to stay at his house downtown (literally down-town!), for I did not want to use peoples’ kindness more than necessary. But resistance was futile. Rafet wouldn’t let me sleep in the forest but insisted he could put my bike onto the roof of his mini SUV and cram all five of us inside the small car. And so he did. 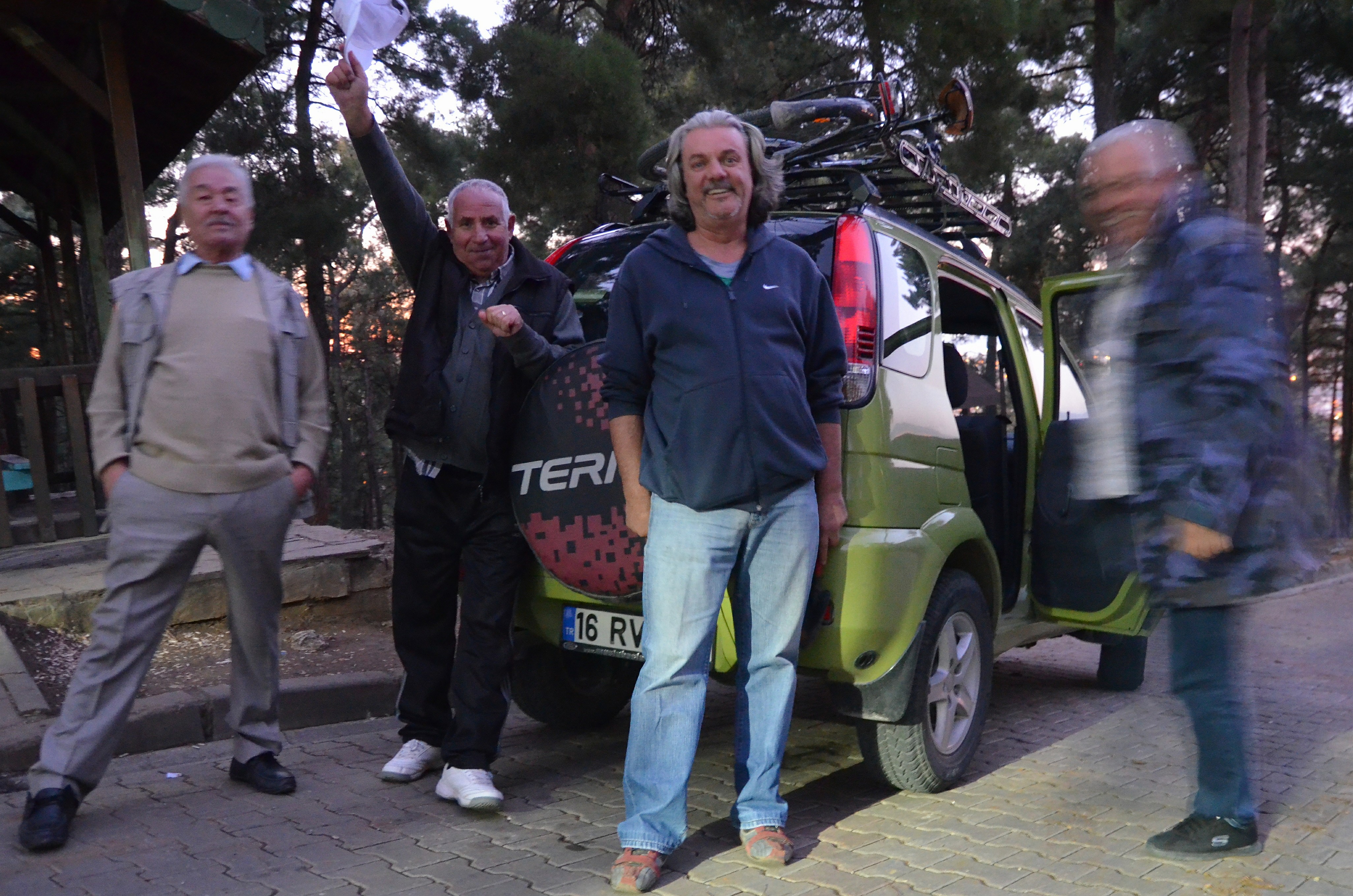 One hour later we were driving down into Bursa where I met Rafet’s wife and a close friend who spoke English. We had dinner together and spent the rest of the evening with friends in a local tea house. To make the long story short: it was amazing, I felt honoured to be their guest, and I never regretted to have had to cycle up to that park again the next morning ;-). 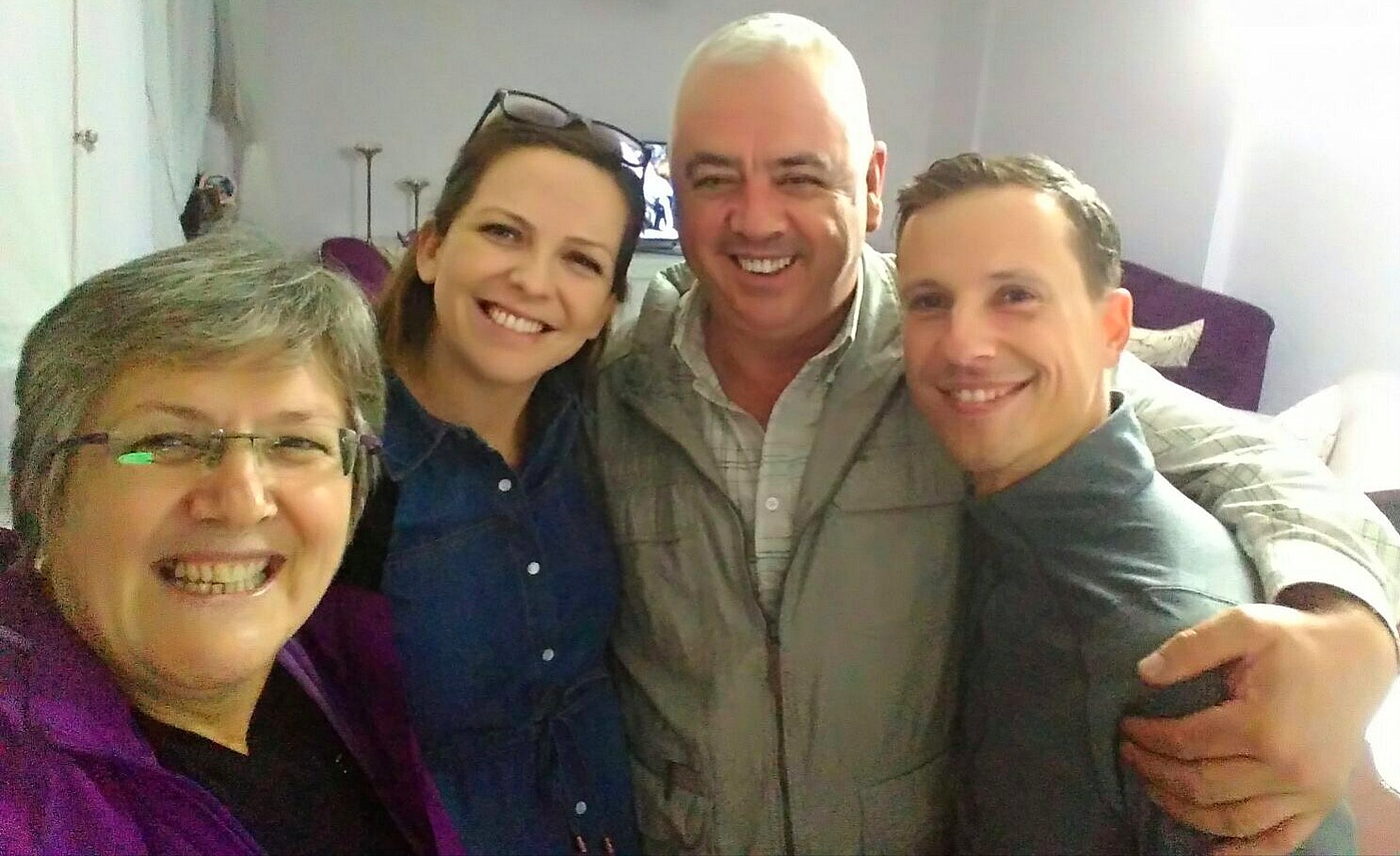 From Bursa I cycled south, passing through the small towns of Orhaneli and Harmancik, always trying to stay on side roads. One day I stopped in the village of Baliköy to have lunch and check my break pads. Minutes later I was surrounded by people curiously watching me doing my repairs, as one man greets me in German. He had come to Germany as a young man, he tells me, and for 30 years had worked for a major automobile industry supplier in the city of Essen. “Good work. Made bumpers for all brands,” he said, smiling. Now retired, he spends his summers in his Turkish home village and the winters in Germany.

He kindly invited me to stay in his house for the night and I agreed, full of curiosity for this family used to navigate both cultures, Germany and Turkey. I didn’t dare to ask whether he felt more Turkish or more German but after an evening spent together with his extended family, I thought I knew the answer.

Despite having lived in Germany for such a long time, his German skills were relatively limited (and his wife’s even more so). And their opinions — political, religious and otherwise — confirmed what I had heard as a theory before: that Turks in Germany are more likely to be conservative than their compatriots at home. I was introduced to all kinds of conspiracy theories according to which America, Israel and the EU plan to cut the great Turkish nation into little pieces “to swallow it more easily”. “Just as they had done with Yugoslavia.” I nodded and on the next morning I cycled on.

From Baliköy I made my way down to the UNESCO World Heritage site of Pamukkale, which is famous for its hot springs and huge white terraces of travertine, a carbonate mineral left over the millenia by the flowing water. Above the terraces tower the ruins of the ancient Greco-Roman city of Hierapolis which had been built as a spa in the second century B.C. It is thus considered to be one of the oldest tourist destinations in human history. Today most tourists there come from China.

Pamukkale is a nice place though and hotels are cheap out of season, so I decided to spend a few days there waiting for Jona to meet me. He indeed joined me on October 19, after almost two months of separation, we’re cycling on together again in the direction of another major tourism hub: Antalya.

In order to get to Antalya, however, we had a few more mountains to cross, passing by the unbelievably blue Lake Salda at an altitude of 1,200m, but we knew that our path would eventually and inevitably lead to a 1,000m descent to the Mediterranean sea. By the time we arrived in Antalya with scorching hot break pads, winter had turned back into summer, Antalya beach was still filled with tourists and palm trees swayed softly in the warm wind.

We know this doesn’t last forever. Tomorrow we have to leave the coast — again — 1,000 metres uphill. And winter is coming.

10 thoughts on “From summer to winter in one hour”