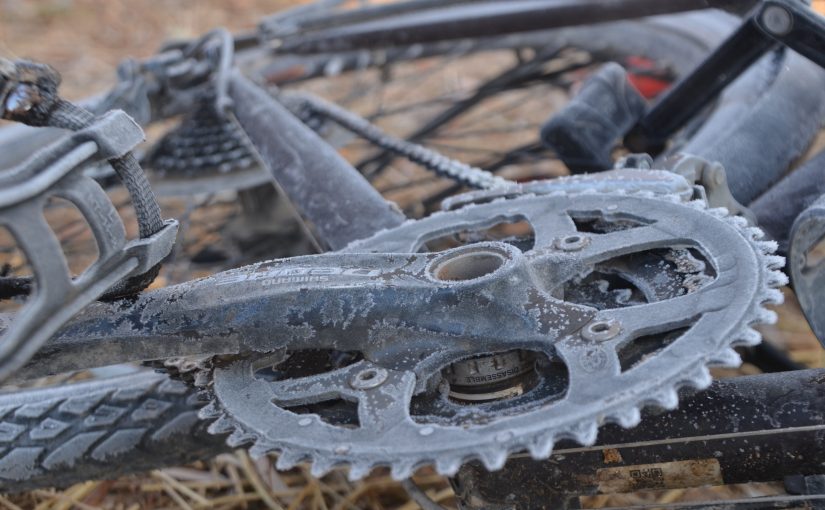 Antalya was nice to us but since we left the coast, the weather has changed. It welcomed us with abundant rain in the mountains and cold winds in the high plains of central Anatolia. And what’s more, I am cycling alone again.

Depite all our efforts (and high hopes raised by the Iranian travel agency we hired) Jona was unable to secure a visa for the Islamic Republic of Iran. He therefore decided to book a plane ticket to India with the (admittedly slim) chance that we might meet there again. It was a great time together, Jona, thank you!

Our departure from Antalya had been rather pleasant. We continued another day eastwards along the Mediterranean — until after about 100km we left the last hotel spa resort behind us — and spent a fun night with a bunch of German longterm tourists and their Turkish friends at the beach. One last time I jumped into the refreshing but still warm waves of the sea before we began climbing north into the mountains.

The mountains gave us two days to adapt before they started throwing rain and thunder at us. The temperatures dropped rapidly and the sight of villages became rarer. We had been recommended a small road said to be beautiful — and beautiful it was.

In a tiny village at around 1,500m altitude though, an elderly man warned us that this was the last habitation until a small moutain town called Bozkir on the other side. We were surprised because we had seen other villages on the map, but just in case we stocked up our food and water supplies. 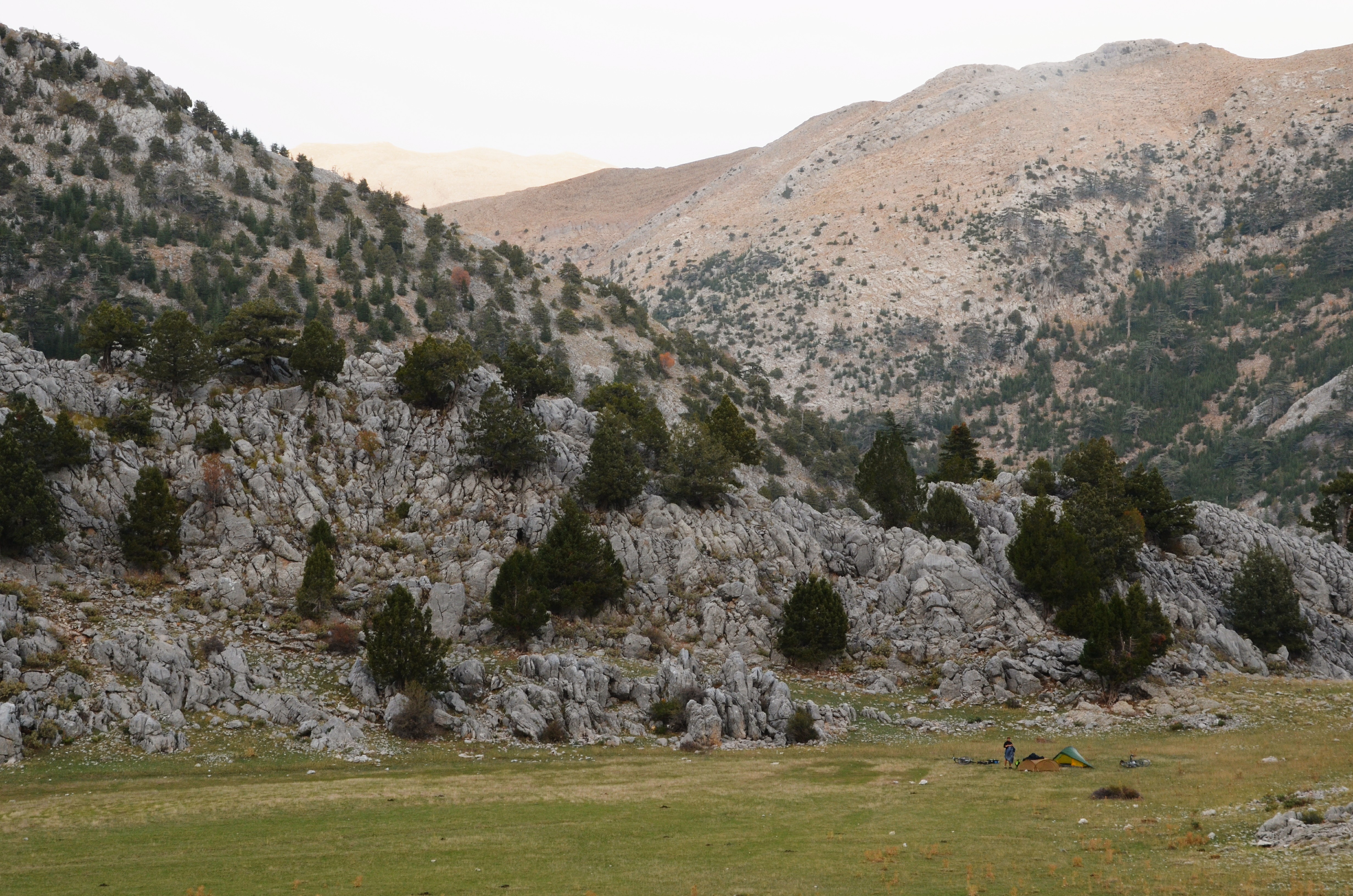 I’m glad we did because when we arrived in the next village the day after, frozen and soaked by the rain, it turned out to be a ghost town inhabited only during the summer. All 50 houses and even barns and stables were locked down (we checked every single door in the hope to find a dry place to stay). No one there. We were at 2,000m altitude by then but because it was only midday, we decided to change into dry clothes, have a warm lunch on one of the open verandas, and carry on.

The afternoon wasn’t much gentler to us, however. We ended up on a dirtroad with mud so thick and sticky (again!) that we eventually had to take our mudguards off to be able to continue moving forward at all. But there was no turning back now. By the time the sun went down, we had passed the highest part of the road and found a muddy and windy spot to camp. 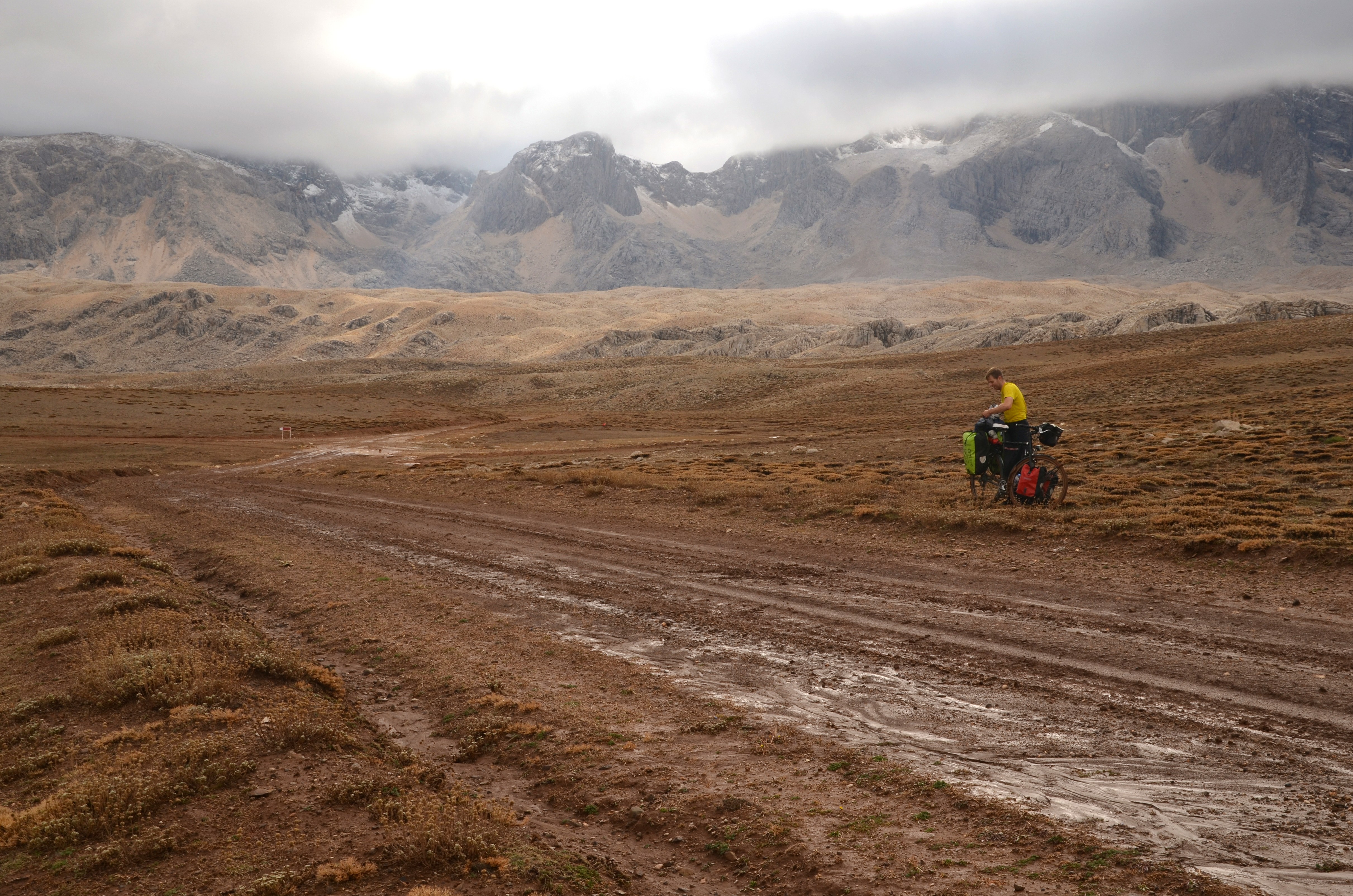 The next morning gave us just the dry 60 minutes we needed to pack up our stuff before the rain started again. It was another half day ride to Bozkir, mainly downhill, but it poured so heavily that we were glad to find one of the typical Turkish çay salonu there and a warm place to stay for the night.

Lucky as we are, we bumped into Serif, a local English teacher, who not only helped us finding a cozy, inexpensive place to stay, but also invited us for breakfast with his parents the next morning! What an awesome start into a new day of cycling!

But temperatures unfortunately never got back to their pre-Antalya levels. We took a fast road to Nigde and the tourist town of Göreme, where we were impressed by the famous Cappadocia region with its houses carved in stone and ancient underground cities which once housed tens of thousands of people to protect them from pillaging armies during war times.

Like in Pamukkale and Antalya before, we enjoyed the amenities of a tourist hotspot but were surprised to find it so empty. Apart from some young European backpackers and a handfull of Chinese tourists we felt almost alone.

Since the city of Kayseri, where Jona left me on November 7th, I cycle northeast on one of the major highways. The mountain road I planned to take was unfortunately closed (a friendly Turkish man warned me in fluent Dutch that it’s impassable, but of course stubborn me had to make the 15km detour to see it for myself!).

Looking back, I’m glad I stayed in the valley. The nights are now regularly below freezing and my old sleeping bag is unfortunately not up for the task anymore. Despite wearing layer over layer, I often wake up in the early morning hours, shivering in the dark until the first sunlight warms me up again. And it’s not going to get any better: Tomorrow I will start a two-day ascent to a 2,200m high pass to reach Erzincan. Yeah! 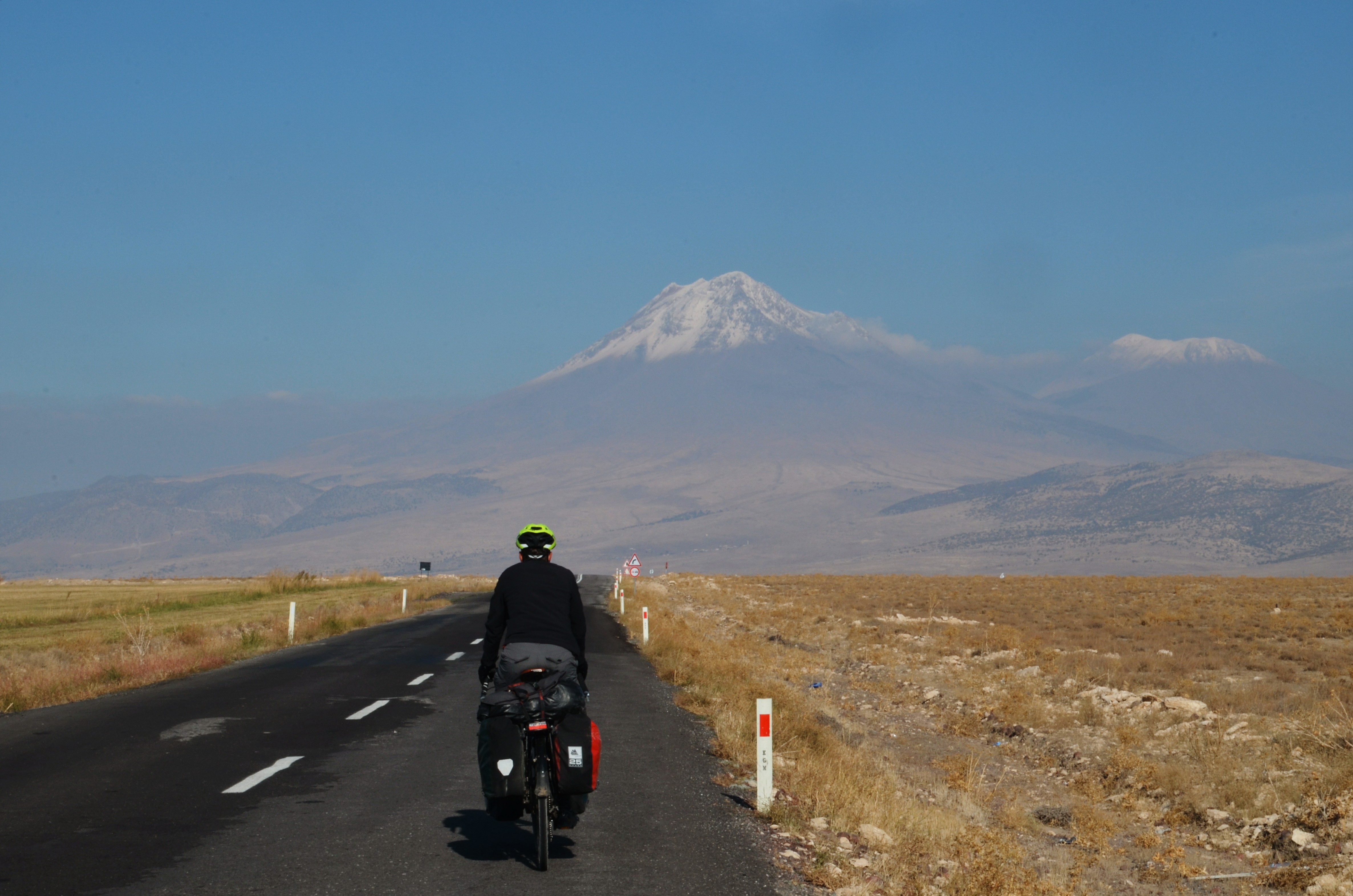 Sometimes I feel as lost in the cold as Jon Snow at the Wall, except I envy the bastard for his warm fur coat. (No spoilers in the comment section, please, I’ve only read the first book so far. Yes, really, I have no idea who dies next.) The highways are quite boring to cycle and if available I try to stay in ho(s)tels to avoid the freezing nights outside.

It looks like I have two choices right now (hardly surprising for those who know me well): Carry on for another two or so cold months until I reach southern Iran with its slightly gentler winter temperatures. Or not.

5 thoughts on “Winter is coming”